skip to main | skip to sidebar

what i have been up too 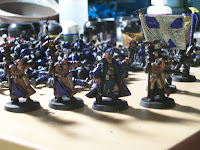 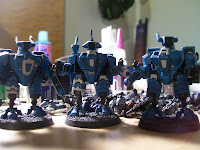 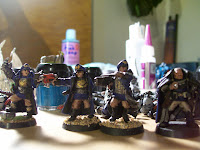 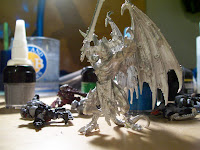 Well It has been quite a while since ive last posted hasnt it? Well work and all the bussnies aside a couple of games came out that I just couldnt pull myself away from. but i have managed to put some painting time in. as you can sort of see i have added a little more detail to a few of my older units , breaking up the color scheme a little. I have also decided that there will be a "color heirarchy" in my IG army with grey being the color for "low ranked" units and blue being for commanders and the like. As for the demon on the bottom.....well its a damn cool looking model that I just had to paint. as of typing this i have some work done on him already however im still debating on the color scheme i want to use on him. ill post what i have done so far on him in the near future.Any way I applogize for the poor quality of the pics but i did them in between rounds of Lost planet 2 so I hope you enjoy

Posted by Chernobyl at 11:00 PM No comments:

Hey there folks. So its been close to three weeks since i have posted anything . This is due largely in part in due to adjusting to my new position at my work and stress from the priors weeks of having very little money so in short stress. That being said im hoping to get some painting time in here within the next week so look forward to some updates here in the near future .

Chernobyl
Posted by Chernobyl at 11:27 AM 3 comments:

Hey there folks. As the title of the post suggests I finished my Tau battle force for the most part.( still need to snag some green stuff and some magnets but the painting portion is completed) which means ill be turning back to my IG here once I muster up the resolve to do so. Any way here are some pics! 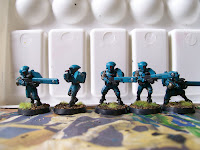 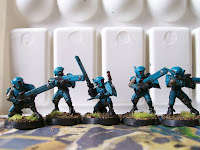 Up first of course are my Fire warriors taking a cue from Flekkzo I added a bit of red and some codex gray to break up the turquoise a bit and am pleased with the outcome. 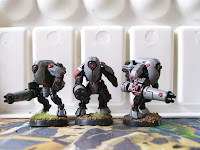 Next up are the stealth suits at this point I'm finding myself surprised by how mechrite red seems to work well with damn near anything. They where painted using fortress gray to break them up a bit from the rest of the Tau. 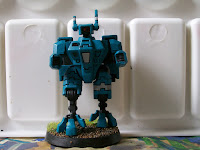 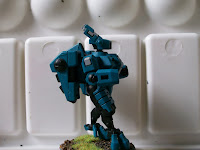 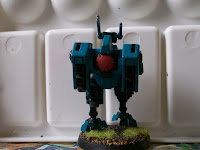 ( quick note I havn't glued the legs down on this guy yet so if he seems a little off center thats why) Finally the battle suit. Again I decided to throw on some more codex grey to break him up a bit and a spot of red on the back. The devil fish hasnt been worked on since it was done the last time I posted a pic of it, until I can get seom green stuff to fill in a few of the gaps its currently on the back burner

Now for a look at my two IG works in progress a tiddting up of my first Lemun russ and a re painting of my ksarkin. 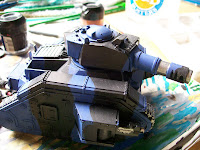 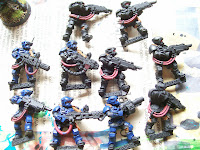 The Lemun russ was the first thing I painted when I bought the first IG battle force. considering its the first tank I have painted I think it turned out alright however after finishing my Tau I looked back at some of my IG stuff and knew I could do better. The ksarkin more so then anything needed a repaint they looked way to bland so a green was of them later (Ksarkin not the tank) and it is time for round two,you can see in the pics the general direction I am going with them. The tank is going to get touched up maybe throw some more stuff from the tank bits sprue to livin it up a bit. So from here it will be IG until I can get my mits on another Tau battle force.
Posted by Chernobyl at 2:45 PM 3 comments:

Alright after all My sappyness last post I figured I better get back to what folks want to see on this blog. In the pics you will see the result of one of the tips I gave , the foundation and wash method for skin one, Which I think looks fairly good. 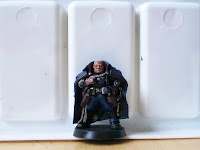 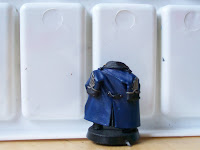 The big man himself. Ursarkar Creed . The model was so much fun to paint and fairly easy considering my somewhat restrictive color scheme, aside from a few minor touch ups he is done. 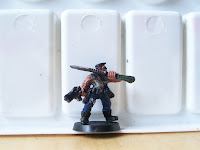 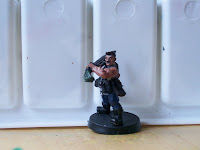 I have never tried the method on more then the face and hands before considering my army is Cadian IG so I was a bit cautious when doing Marbo. I am pleased to say that he turned out great and despite being a Catachan based model will fit in well enough with my Cadians. the tassel on the blade was done using a fortress grey base with a few thraka green washes applied to it. 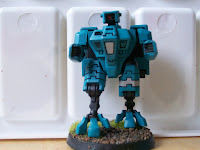 And because I havnt posted anything Tau related in a whilte. My crisis suit based and looking snazzy. I havnt put the ear bits on yet since ive been busy with other stuff but I should have him and the rest of my Tau based and completed here in a few days look forward to more pics in the near future.

Well I hope you enjoy the pics I welcome any feed back. Have a good one.
Posted by Chernobyl at 2:13 PM 2 comments:

No pics this time around folks but look forward to some in the near future including Usarkar Creed , Sly Marbo (er i guess its just Guardsmen Marbo now) and my first Leman russ. However the overall point of this post is a sort of self reflection on my painting progress and experiance so hopefully if a new person comes along and reads through this blog they will learn from my mistakes.
( General tip )
(painting tips)

Well thats all I got for now. please note that thies are only my observations in my forays in painting sometimes its different for others its a matter of trial and error. I hope this helps someone. Until next time take care.
Posted by Chernobyl at 8:27 PM 2 comments:

Well As you folks recall I said I was going to paint a Necron lord....Snot green with scorpion green highlighting.....yeah didnt work out for me so well HOWEVER I came up with something , I think, turned out very well and proves that I seem to have a thing for turquoise... 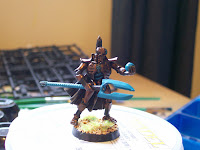 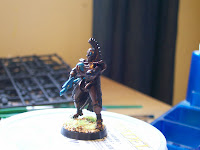 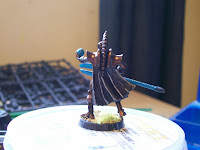 Despite the fact that I dont currently have any intentions to play Necrons...I have to say that this is possibly second only to my Commisar Yarrik on how proud I am how it looks and turned out. On top of that I finished the thing in a little under two hours ( no including primering and the intial green application) This might be due to the fact that a single metalic color paint on a Necron will make it look cool as crap no mater what you do. While its not technicly 100% finished ( im debating if I want to add the green plastic bit or not and the back cape needs a quick badab black wash) its about as close to perfect as im going to get with this guy.
Posted by Chernobyl at 5:24 PM 1 comment:

Tau and side project pics.

Alright the stuff you folks have been waiting for pics of my Tau accompanied by notes and thoughts.I'll start off with the test kroot. 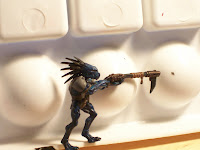 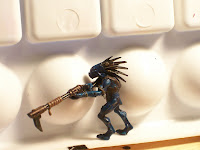 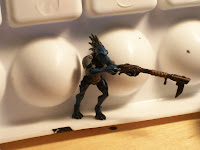 Here is the more or less completed test kroot. Hes a little darker then what my plan was but I like the over all direction and color scheme. The gray shoulder pad is to tie him to my army. I might do some "war paint" on him but I am not 100% certain i want to take that root. 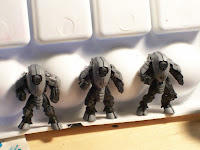 The stealth suits are done aside from touch ups and gluing the guns on. I figured I needed something that looked at least somewhat out of the color scheme just so my army dosnt look like just a tide of hawk turquoise . Its simple coloring but I think it looks good. 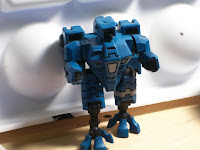 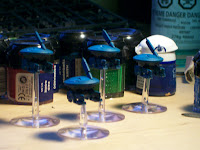 The Battle suit is assembled aside from the "ear" bits , the pose is a bit generic but as I am not yet comfortable enough to do some heavy modifications on something I acctually intend to play it will have to do. The drones are finished ...pfft like any one cares about drones....


And now for some stuff none Tau related! 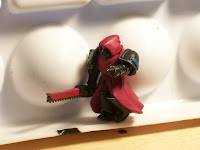 Yup the side project the basic part of him is finshed I need to do some highlighting touch ups and all the free hand stuff I have in mind ( god help me) I am digging the way he looks though the left arm ( facing arm) was a bit of a pain though as I had to trim the shoulder a bit in order to get it to set properly. If i didnt his arm would be pointing a bit to the left....which looked goofy. 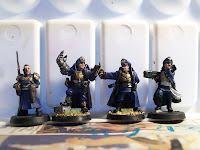 Also A pic of my IG comander and commisars. Im planning to pick back up on thies guys shortly, the commisar on the end just needs the sword on the sword arm painted before i glue it on. I am also working ( after a recent green washing) on Usarkar Creed he was almost finished but the coloring and look to the face and hair bothered me to no end. As for the state of the IG in general I need to base all my basic infantry ( ugh) build and paint a standard leman russ and a demolisher ( double ugh) and 6 heavy weapons teams ( Face palm).

Well thats the update for now. Now for a little bit of a treat for myself , If you folks read one of my previous post you know I have some necrons sitting around, well one of them is a necrons lord and seeing as i'm on unpaid leave for about two weeks or so ( I work at a school cafeteria and the normal confrenses we have over the summer of them most have dropped out due to the economy....) I figured I would try out a basic paint scheme idea I had for them....Snot green with scorpion green highlighting. We will see how it goes once I get around to it. Till then, cheers.
Posted by Chernobyl at 9:45 PM 5 comments: